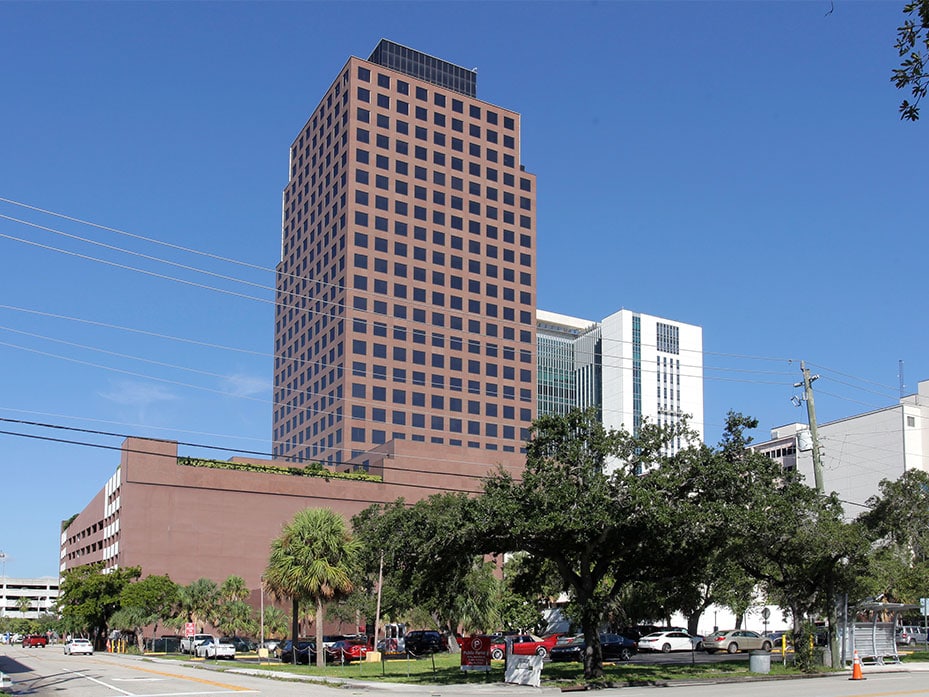 One of the most recognizable buildings on the Downtown Ft. Lauderdale skyline, this iconic tower was originally known as the “AutoNation Tower” and served for many years as the headquarters for the country’s largest retailer of cars and trucks. In 2008 due to industry challenges, AutoNation announced they would not renew their master lease and would instead consolidate into a newer and smaller building. Now, with the need to backfill the entire building which was AutoNation’s space, a complete renovation would be required to bring the property up to contemporary standards for multitenant office buildings and make it competitive. Also, the fact that the tower was completely “off the radar” in terms of the local brokerage community was another issue, since it had been 100% leased to AutoNation for over a decade. Further complicating matters were the increasingly difficult office leasing conditions, as AutoNation’s decision to relocate came just as the South Florida and US economy was slipping into a recession.

Laurel Oswald and her team were retained to reposition and release the building simultaneous to a multimillion renovation. They immediately converted a number of subleases to direct leases and through aggressive marketing secured a number of new tenants to quickly bring occupancy up to 60% while they began stabilizing the building. To attract new tenants to the property, a strategic redevelopment, rebranding and marketing plan was implemented that would capitalize on 1) the building’s location directly across the street from Broward County Courthouse and 2) becoming the sole multi-tenant, “green” LEED Gold office building option in the market. Playing off the street address, the building was rebranded as “110 Tower” and marketed as a location “where your office works 110% better.” Simultaneously, a $15 million renovation of the building’s lobby, common areas, and building systems was launched. In addition to the dramatic new look, 110 Tower would also benefit from a significant expansion of its on-site retail amenity package including new retail options (new rentable building area) on the first floor of what was previously a parking lot and Autonation’s car showroom. Armed with new marketing materials that highlighted the extensive redevelopment work, 110 Tower was repositioned and to the legal community, local professional services and technology firms as a “new” Class A property offering state-of-the-art systems and a market leading mix of amenities and services.

Over the next few years, the building captured the lion’s share of downtown Fort Lauderdale’s Class A absorption with nearly 394,830 square feet of new leases, renewals, and expansion often at rates 5% higher than the competition. This was achieved during a period of intense competition among landlords. Laurel and the leasing team also cemented 110 Tower’s role as a leader in downtown revitalization efforts through a number of strategic partnerships and promotional efforts, such as the creation of the 6th Street Taskforce with the city and Downtown Development Authority and the Greater Ft. Lauderdale. In addition, each lease transaction was analyzed in terms or its impact on the future NOI and exit value of the assets. Ultimately 110 Tower achieved 85% occupancy and is viewed as one of the premier office buildings in its market. The leasing focus and momentum along with the successful renovation program allowed ownership to achieve their objectives and provide an increase in asset value for its investors. The building ultimately traded in October 2016 for $113M ($286/FT) which was a 112% increase from it’s prior purchase price.