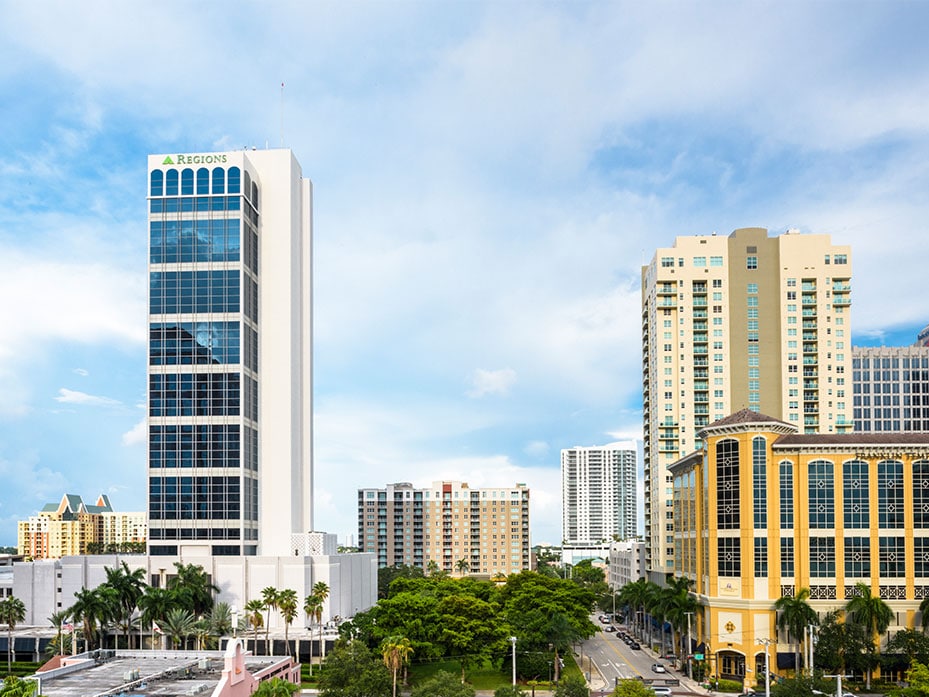 As of the tallest and most historic building on the Downtown Ft. Lauderdale skyline, this iconic tower was originally developed in 1972 and would require significant renovation to every part of the building both mechanical and cosmetic to compete favorably in the Class A CBD market. A complete renovation lasting and staged over several years would be required to bring the property up to contemporary standards as a premier multi-tenant office buildings. The building was approximately 70% leased with existing tenant’s paying below market rents, four full floor tenants only paying partial rent and several vacancies and static vacant spaces. Second generation spaces were inefficient and did not show well. The spaces were not “tenant ready” and thus challenged with competing favorably in the highly competitive market.

The current leasing team was retained to reposition and release the building simultaneous to an $8 million renovation that would be staged over the next several years. The previous leasing team was marketing the building at $16.00 NNN in 2011 and our team immediately moved rental rates and achieved a $20.00 NNN lease within three months later. A “Rent-Ready” Spec Suite program was implemented and marketed to tenants in the 1,000-3,000 SF range. These Spec Suites were the market leader in this concept and was highly successful with driving rates and lease-up. Fourteen spec suites were delivered and leased within 6 months of delivery with 30% of these tenants ultimately expanding into larger spaces in the building To attract new tenants to the property, a strategic renovation, rebranding and marketing plan was implemented that promoted 1) the building’s spectacular views and location in the heart of the CBD and proximity to Las Olas) 2), selling the vision of the ultimate $8 million renovation of the building’s lobby, common areas, building systems and future new retail options (new rentable building area) on the first floor of what was previously open area leading to the parking garage, along with the buildings hurricane impact glass 3) the premier on-site retail amenity package including a high-end Tenant amenity Conference Center and Gym (previously static vacant space), Tower Club (Club Corp) private dining club on 28th floor, retail bank and deli. The Building was aggressively marketed to Brokers and the professional community, as a “Best in Class” Class A property extensively modernized with market leading mix of amenities and services.

Over the next few years, the building was aggressively marketed and captured 143,326 SF of new tenants (including 7 new full floor credit tenants) and approximately 100,000 SF of renewals during a time of significant renovation and with spaces requiring renovations and swing space. One of the key renewals was with Regions Bank with a 15,000 SF ground floor Retail Branch along with the entire 17th floor. Rates achieved throughout lease-up were often 5% higher than the market and during a period of intense competition among landlords. The Leasing team also formed a number of strategic partnerships with the City and Downtown Development Authority and the Greater Ft. Lauderdale. Alliance. In addition, each lease transaction was analyzed in terms or its impact on the future NOI and exit value of the assets. One Financial Plaza is currently 93% leased and is achieving $35.00 NNN Rents and is viewed as one of the premier Class A office buildings in its market. The leasing focus and momentum along with the successful renovation program allowed ownership to achieve their objectives and provide an increase in asset value for its investors. The building ultimately traded in 2017 for $11385M ($/FT) which was a 93% increase from its prior purchase price.